Learning from our past two days experience, we decided not to ride in the day till we reach Jammu. This was one of the best decisions we’ve had in the past three days.

The place we stayed was really good. The people too. They were extremely friendly and helpful.

We had to get our chain adjusted and cleaned. So, in the morning, we went to a nearby mechanical shop. We asked the locals how they ride in the sun, they said nobody rides for long distance during these times.

I had left the bike in the sun for 10 minutes while they were adjusting the chain on Vignesh’s bike. When I got back on the back and touched the handlebar, it burned my finger. I kid you not, it literally burned. I had a black mark on my hand for several days.

We started past 6 in the evening. The road from Jhansi towards Chandigarh was terrible. Broken road, extremely dusty, too many trucks, single lane. It was just wonderful. /s

We had to be very careful in those roads as people were going absolute bonkers in it Even a small accident in those regions could cause a lot of trouble to us. So we were riding quite slow.

After a 100km or so, the roads were good again.

We stopped for dinner in a village somewhere near to Gwalior. It was a road side Dhaba.

The food was really good, but we were quite surprised by the bill. It was a fairly big Dhaba and the guy was overcharging us. Maybe he knew that we won’t argue and would just get on with it ( We didn’t argue )

Lesson Learned : Ask the price of the items before you start eating. They might overcharge you if they think you are an outsider

Continued the journey, and now we were going a bit faster because of the good roads.

It’s a 4 lane road with a median between the opposite lanes. Even then, there were several instances where trucks would come head on. We came to know from the locals that this is quite common and most of the time, the truck drivers will be drunk

Somewhere around two in the morning, we reached the Yamuna Expressway. This was the most amazing highway we have ridden so far. Period. 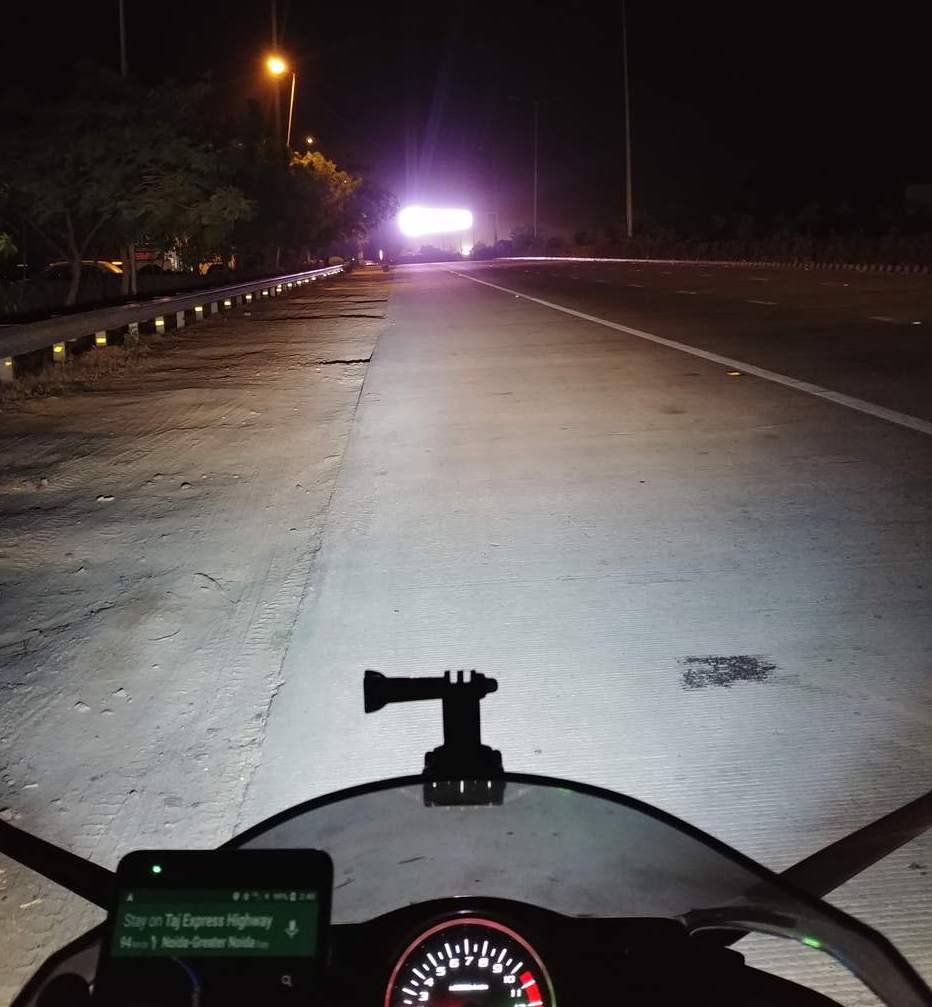 Not going to lie, we were going fast. Just pick a lane, shift to 6th gear, twist your wrist and just enjoy the ride. It was fun.

We have to travel 430km more to reach Chandigarh. The sleep was getting into all of us But the occasional tea breaks were really helpful.

And the fun of riding at night in the empty highway is always fun.

We have reached somewhere in Haryana by 6 in the morning. Sun was rising and it was a beautiful morning. Hunger got into all three of us and we had to stop for breakfast. 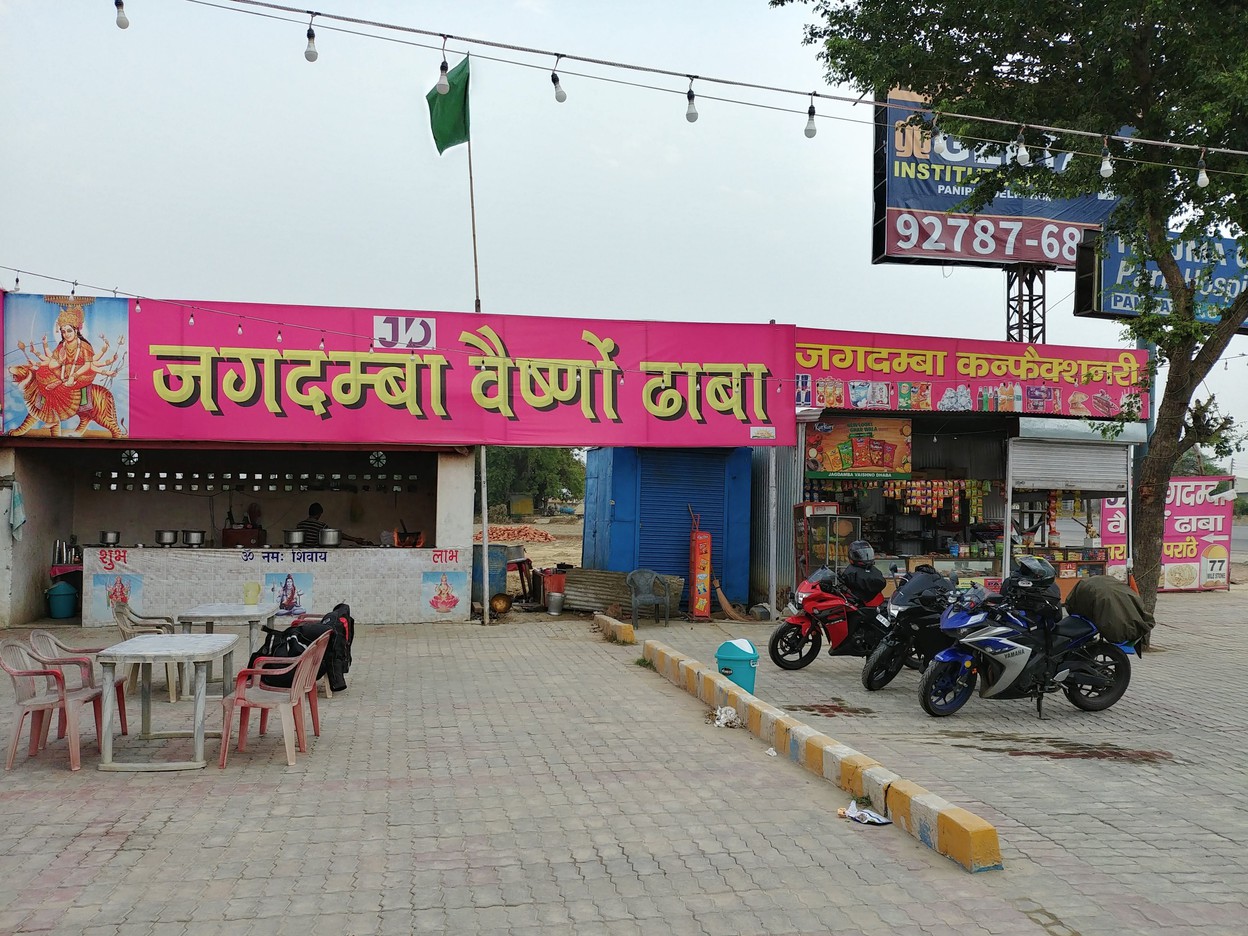 Such a peaceful place it was 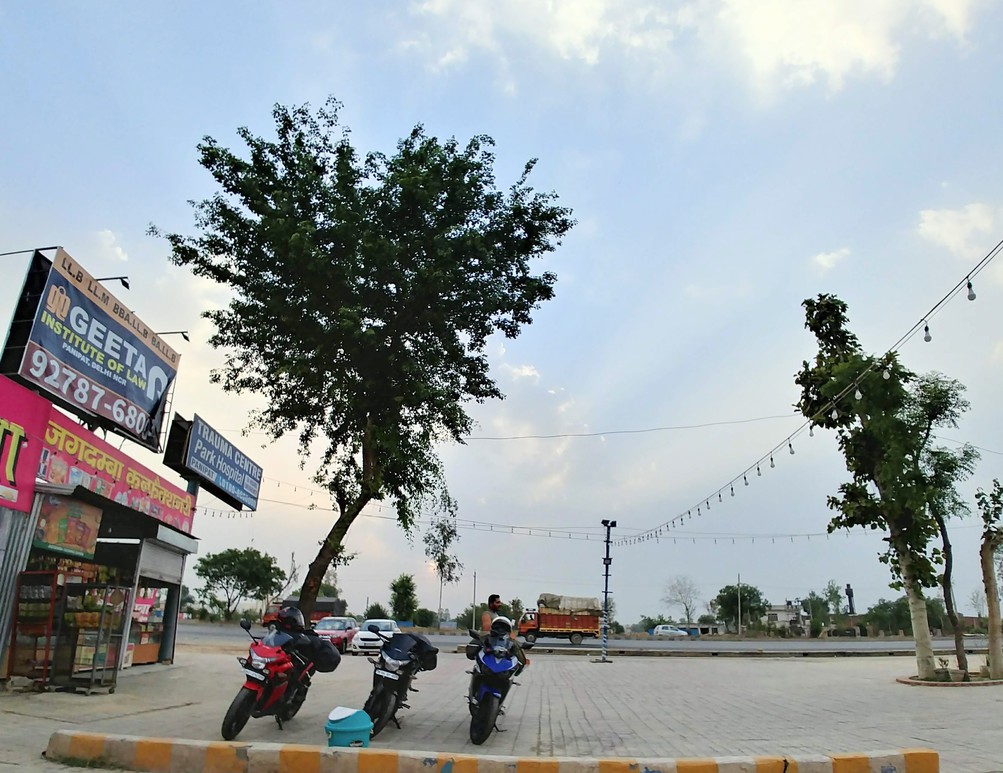 Here is a wide angle shot of the same place

It felt different, eating breakfast at 6 in the morning. Then again, comparing to what we’ve been doing for the past three days, it was nothing 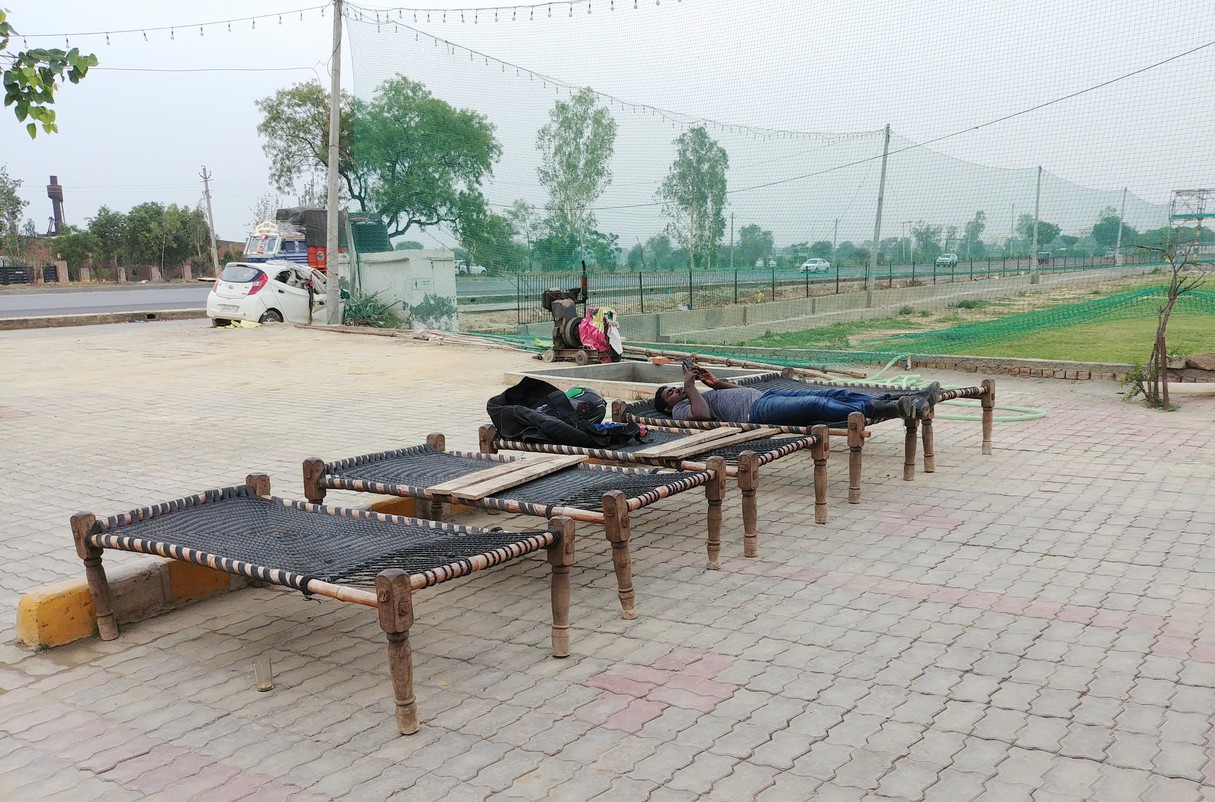 The place had beds like this and Vignesh already occupied one. I just wanted to stay there and sleep. But Chandigarh is still 180km from there and if we spent too much time there, we’d have to ride in the sun. And that is something we don’t want to do anymore

And here is a bonus picture of Abhishek’s R3. Isn’t she pretty?

We continued to ride towards Chandigarh. It was a Wednesday morning and there were plenty of vehicles on the road. It wasn’t that bad though

That day, I have experienced something I have never experienced before. I slept for a few seconds in the bike, while in the highway. I don’t remember falling asleep. But, when I opened my eyes, I was confused for a few seconds and I was moving off the road towards the median. Luckily, nothing happened.

I told the guys that I cannot continue, we have to stop for a few minutes. So we stopped near a tea shop.

Once I was pretty confident that I could ride and won’t sleep on the road, we started again.

It is extremely dangerous to ride/drive without sleep. If you feel sleepy, stop somewhere and sleep for a couple of minutes.

We reached our hotel somewhere around 10 in the morning. And we are supposed to check out in the next hour. We had to pay them some money so that we could stay for 6 more hours.

After taking a shower and light breakfast, slept like a baby for couple of hours.