Finally, it was the day. 27th May 2018. We were supposed to start riding by 4.30. You know the plans never work properly, at least with lazy people like us. We slept around 2 only - we were still packing btw. 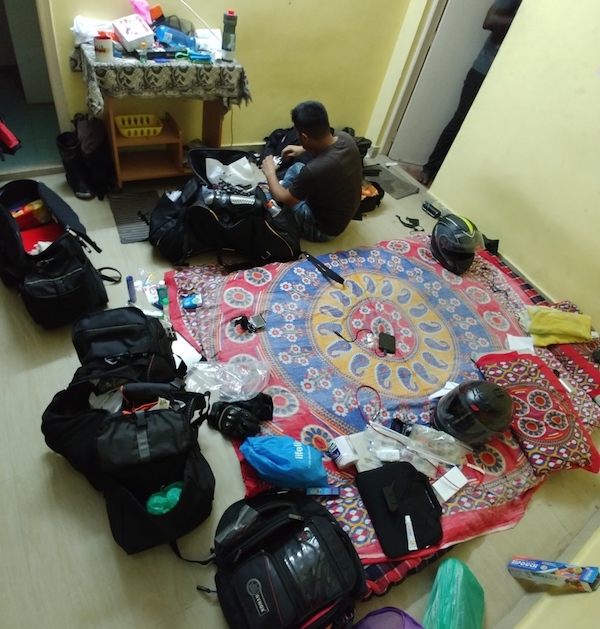 Hear this: We have to start the ride at 4.30AM, travel 900km and at 1.30AM we are cleaning the motorcycle chain. Such chilled out (read lazy) people we are.

Finally, woke up around 4AM, got ready and packed everything onto the bike. It was exhausting. Time was around 5AM and it was already too hot. Bangalore is a relatively cold place and we felt hot right in the morning. I did not have any clue about what’s to come. The ignition was at 5.30AM (just an hour late, not that bad eh?)

First few days it’s going to be highway run. So, not that amazing, fun nonetheless. 900km in a single day on a motorcycle in this weather (39-45 degree celsius) is a little bit insane, even for us. I think we didn’t give it much of a thought and we just went along with it.

We rode for a few kilometers and stopped for tea. It’s a Sunday and even then the Bangalore traffic is at its absolute beauty. We had to get rid of the city as soon as possible and we continued the ride. The weather was feeling much better and it was not hot at all. Even though we didn’t sleep for more than 2 hours last night, we weren’t feeling tired at all, probably because of all the excitement.

The highways were fun for the most part. We were cruising at triple digits, comfortably. At first I was a bit worried that the saddle bags might cause problems, but it didn’t. A few hundred kilometers from Bangalore, we stopped for breakfast.

One annoying thing about motorcycle riding is all the gears. The helmet, jacket, gloves, the knee guard etc, You have to remove them when you stop for a break and wear them again

Indian roads survival tip #1 watch out for cows and buffalos#

(Even if they are far far away from the road.)

It was in the national highway itself, Abhishek is in front of me and we were cruising pretty fast. He is at least 300 meters in front of me. And suddenly, a group of buffalos from the opposite lane, they were crossing the road. Seeing them, Abhishek slowed down, he came to ~ 5km/h. But this one buffalo, he didn’t stop, he just ran really fast across the road and into Abhishek and his bike. The buffalo came and hit him and he dropped the bike.

Nothing happened because he slowed down and came to a stop. His clutch lever broke, but it’s still perfectly usable. The fairing got a small scratch too. But, no big deal. Luckily, Abhishek was completely fine.

After making sure that everything is fine, we continued our journey. And the good thing was, the Hyderabad highway is amazing!! 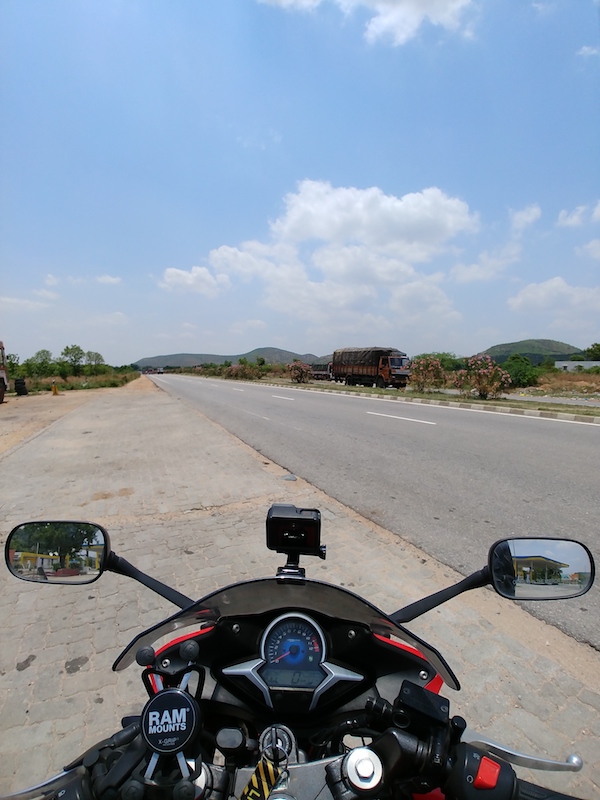 And the bad news is that it’s hot!! Super hot (but we had no clue what’s waiting for us tomorrow)

Towards the evening, we have reached Hyderabad. The traffic!! Man, the traffic is insane. I’m from Bangalore and should not complain about the Hyderabad traffic. But the thing is, it’s way too hot than Bangalore. And since the roads are a bit wider on most parts, the people are going absolute bonkers in it. In Bangalore, you cannot go like that because everyone will be stuck in traffic for the most part. This was crazy. We had to go slow. Like real slow.

When we started, according to Google Maps, we were supposed to reach around 6.30PM. But it’s already 6.30 and we have another 300kms to go. Totally our fault - we spent too much time chilling than riding.

After getting out of the city, the roads were clear again. And we were happy. I started to realize the exhaustion by now. There were no pain, just tiredness. The fact that we didn’t sleep properly yesterday added to it.

The hunger started to kick in and we could not continue without rest anymore. So we stopped to eat something. The road side Dhabas have been good for us so far. I ate quite some. I was really hungry. We spent almost an hour there. We were all recharged after that. It was very dark by then. The auxiliary LEDs came into action and they were very helpful. After this break, we didn’t have much breaks. We kept going. It was amazing again.! Night ride is always amazing especially when the roads are clear.

Towards 12AM, we reached our hotel. We had booked the hotel in advance and realized that it was the best decision. The city was mostly empty around this time. The hotel was decent enough we wouldn’t care at this point anyway, we were that tired.

Removing the saddle bag and then carrying the helmet, saddle bag and the tank bag while wearing the full riding gears is the main task each day. But hey, look on the bright side - we have enough oxygen right now, unlike the coming days!

Pro tip : Carry absolute minimum clothes (and other stuff). We won’t use most of it anyway#

The day has come to an end. Took a bath and ate the food we had ordered. And hit the bed. I don’t even remember when I fell asleep. I woke up to the alarm.

We woke up a bit late. Actually, very late. After getting ready, having breakfast and mounting the bags on the bike, it was around 9.30AM - that late. 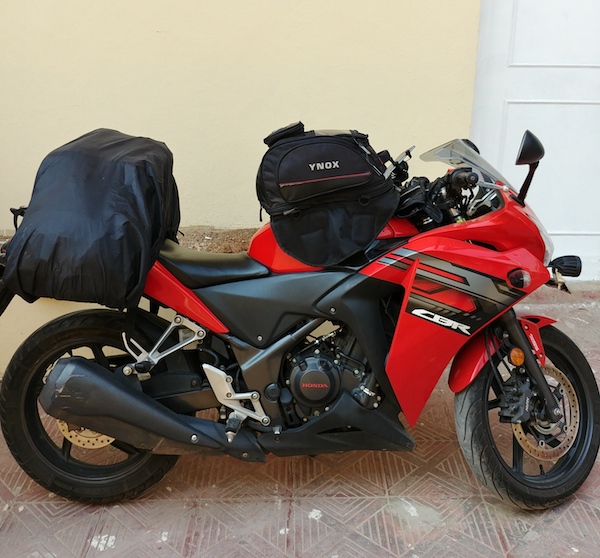 All packed and ready to go

My saddle bag looks very weird because I hadn’t packed things properly. I have my stuff all over the bag, it was all folded properly on Day 0, not anymore. In my defense, I was tired.

Spoiler alert : This was the most difficult of all 18 days

The roads were small, but well built (for the most part). Even at 10AM, the sun was getting more and more aggressive. After getting out of the town, it was open highways. Amazing roads. The ride continued. It was fun.

But the fun didn’t last long. It was getting hotter and hotter. Right now it’s past 40 degrees. It was lunch time and we were hungry (and very very thirsty). I had the water bottle with me but forgot to fill water :facepalm:

When touring for long distances, always keep a bottle of water handy. Dehydration is very dangerous and could cause a lot of problems. Drink before you feel thirsty.

It was around 45 degree celsius

The thing about these places is that it’s really hot and the humidity is very low. That means the sun causes burns.

Even with the helmet with visor closed, the balaclava and sun glass, it felt like my face was melting. This is the first time I am experiencing something like this It was difficult.

And we stopped for lunch somewhere near Nagpur. It was a nice place. 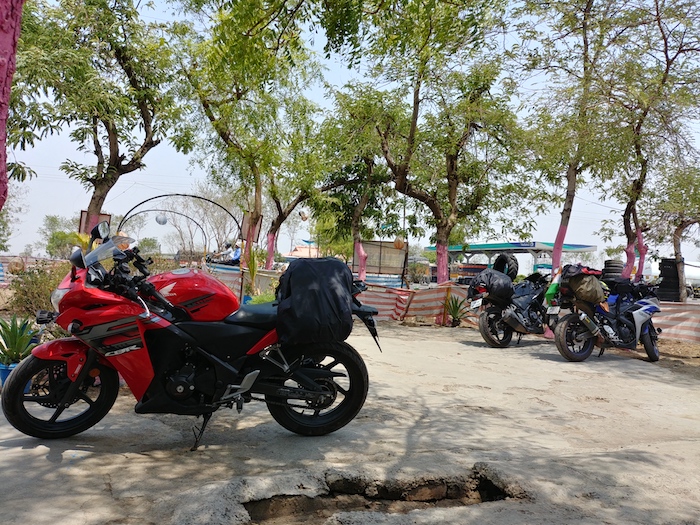 The food was amazing! I took chicken curry, some dal, a lot of curd and rice. It was a very satisfying meal. The curd helped a little bit with the heat. After the lunch, we waited there for quite some time. We were waiting for the sun to calm down a little bit. We actually waited almost an hour there. Around 3PM, we started the ride again.

I took a look at Google maps and was delighted to see some greenery in the maps coming up. That was a huge relief. And it was amazing. We were going through the “Bhander Range Forest” and “Pench National Park”. The roads were curvy and beautiful. It was fun again. 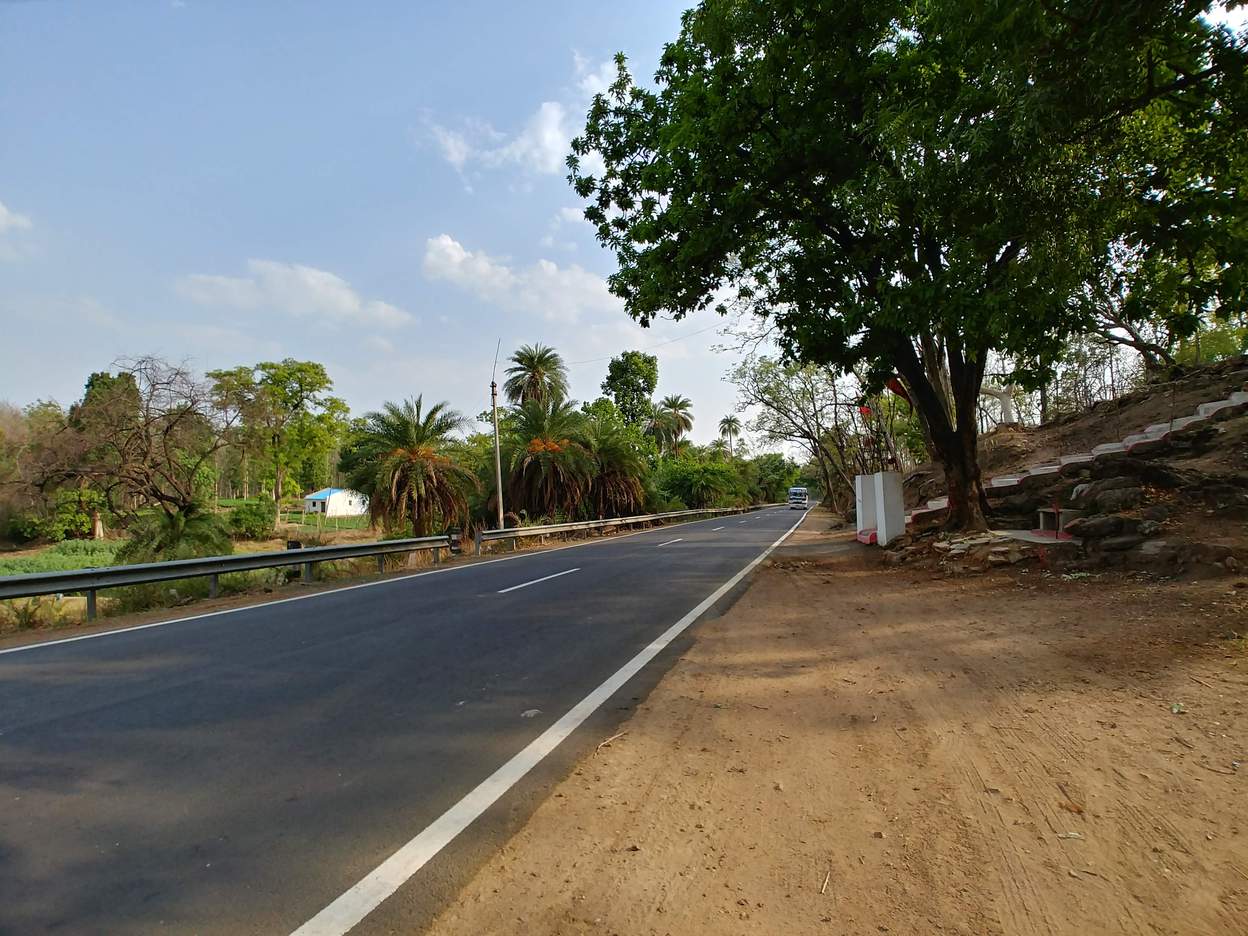 Ride through the forest was refreshing

By 8 in the evening, we were still 350km away from Jhansi and we stopped somewhere in a remote village for a tea break. 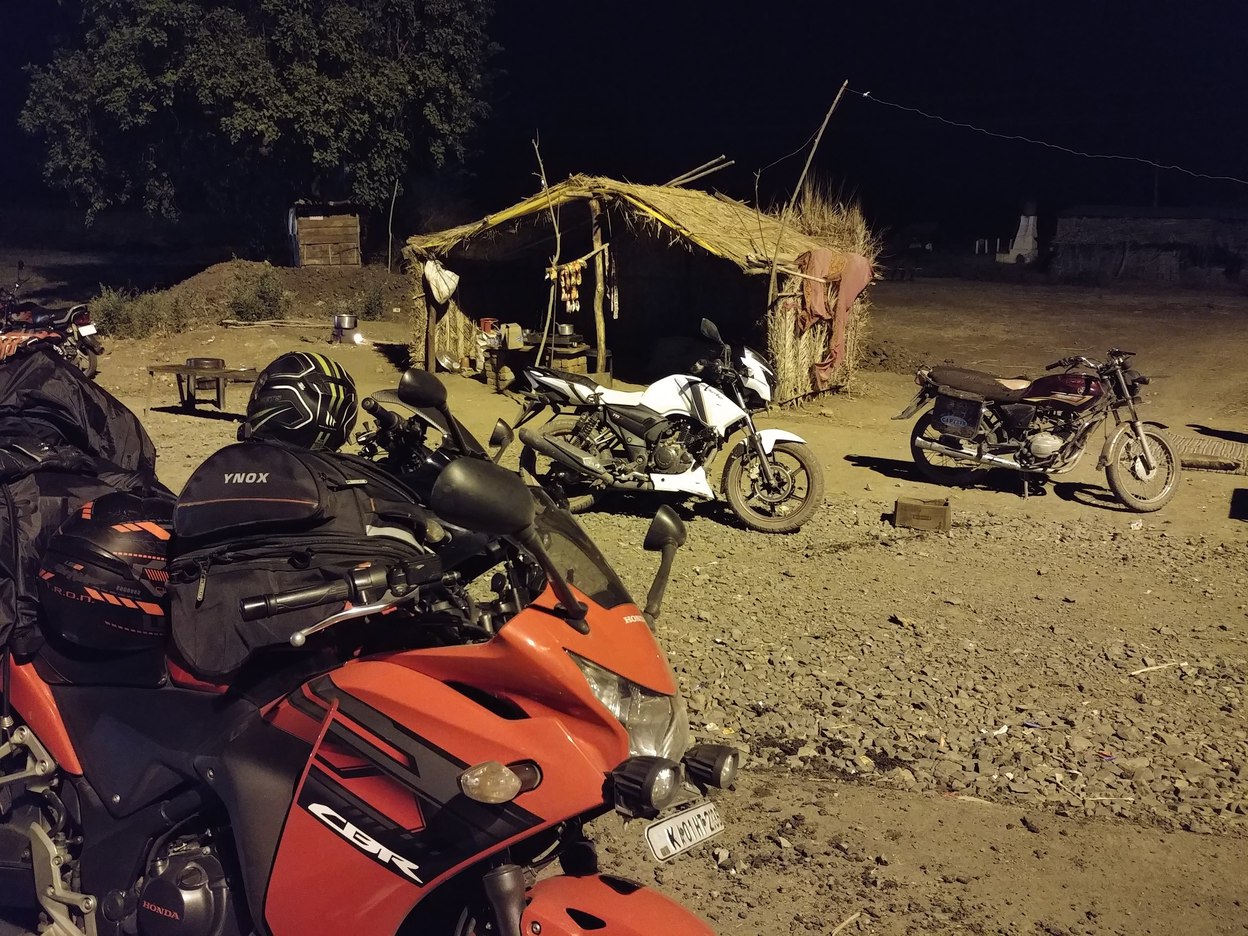 Almost near Jhansi, we had to go through an army check post. I am not sure what it was, but since it was very late in the night, we had to explain to them that we were travelling to Ladakh and we are staying in Jhansi for the day. After a couple of minutes of questioning they let us go.

Reached Jhansi (Uttar Pradesh) early in the morning. It was one hell (you could say, ‘literally’) of a day

We were sleep deprived, exhausted, dehydrated and burned from the day. What a day

Lesson Learned : Don’t travel in a bike through regions like MP, UP during summer